Whether or not the wage gap is a product of sexism is the point of contention.

Discrimination is generally illegal regardless of whether it is based on sex, or gender, or both sex and gender. You apply for a job for which you have experience and excellent qualifications, but you are not hired because some of the company's long-time clients are more comfortable dealing with men; you are told that you are laid off due to company cutbacks and reorganization, while men in the same job and with less seniority than you keep their jobs; you have worked for your company for several years, receiving exemplary reviews and an employee-of-the-year award, yet each of the five times you have applied for promotions, the positions you applied for are instead filled by less qualified men.

You worked your way up from the position of cook's helper to chef. A male chef with similar training and work experience was recently hired, and you find out that he will be paid more than you; you are a top salesperson for your company, but are moved to a less desirable territory while a man with much lower sales is given your territory and client base, enabling him to make much more in commissions than you will make for several years.

You work at a company for four years and put in many hours of overtime.

After you return from having a baby, you tell your employer that you will not be able to put in as many hours of overtime. Your position is then changed to a lower level and you get less pay, while male coworkers in similar positions are allowed to cut back their overtime hours for personal reasons without any changes to their positions or pay.

Your company's health insurance policy does not cover your spouse, because it is assumed that he will have his own benefits, while your male coworkers have their wives covered by the policy. Because your husband is between jobs, you have to pay increased health benefits on his behalf that your coworkers do not pay for their wives.

This law makes it illegal for an employer to discriminate against individuals in hiring, firing, and other terms and conditions of employment, such as promotions, raises, and other job opportunities because of their sex.

The laws of most states also make it illegal to discriminate on the basis of sex. For more information, see question 19 below. Additionally, there are specific laws protecting employees of federal contractors from sex or gender discrimination.

Explicit protections against compensation discrimination, sexually hostile work environments, discrimination based on pregnancy, childbirth, or related medical conditions, and discrimination against unlawful sex stereotypes, gender identity, and transgender status are made in the new rule.

This new rule further enforces Section of the Rehabilitation Act of These laws make it illegal for contractors and subcontractors doing businesses with the federal government to discriminate in employment because of race, color, religion, sex, sexual orientation, gender identity, national origin, disability, or status as a veteran.

They are also prohibited from discriminating based on the disclosure or discussion of compensation with other employees. 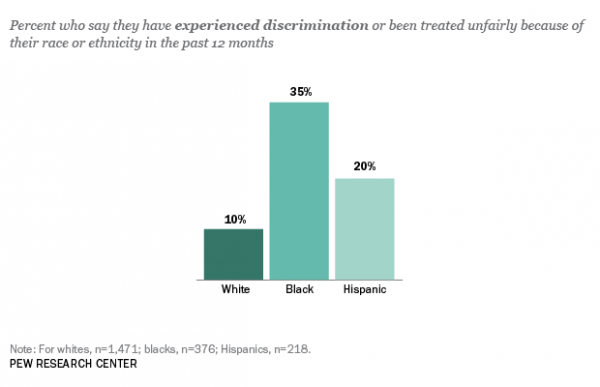 This rule will appear in an upcoming edition of the Federal Register. Please check back to find when the final rule has been published and when it becomes a law. Who is covered by the law? Title VII covers all private employers, state and local governments, and educational institutions that employ 15 or more individuals.

Many states also make it illegal to discriminate on the basis of sex. For more information, please see our page on the minimum number of employees needed to file a claim under your state law. The law's protections apply to both current workers and job applicants.

If you are a current employee and are fired, not promoted, or not accommodated due to your sex or gender, you are protected.Your Stories of Racism.

I saw the request for personal stories about “The Talk.” (One of the commandments my mother gave me: When I get pulled over, pull over in a populated area so there.

5. Personal experiences with discrimination Roughly seven-in-ten black Americans (71%) say they have personally experienced discrimination or been treated unfairly because of their race or ethnicity, including 11% who say this is something they experience regularly.

SUBJECT: EEOC COMPLIANCE MANUAL PURPOSE: This transmittal covers the issuance of Section 10 of the new Compliance Manual on "Compensation Discrimination." The Manual Section provides guidance and instructions for investigating and analyzing claims of compensation discrimination under each of the statutes enforced by the EEOC.